We are settling into our newly revamped kitchen and I have to say that I just love it!  It turned out just the way I pictured it would in my mind.  I think we created a white kitchen that still has a lot of warmth. We still need to switch out the chandelier and add pendant lighting.  We will get to it at some point but at the moment  I am still looking and trying to find what I really want.  For now, I wanted to share our journey with you.

Designing a White Kitchen with Warmth

This is an image of the finished kitchen and here is a reminder of the before.

At the beginning of this process, my husband and I shopped around to find exactly what we wanted…from flooring to appliances, plumbing fixtures, countertops and a visit to the neighbors to see their newly stained cabinets. Once all final decisions were made and orders were placed things began to happen.

The first installation was the countertops.  We chose Nero Quartzite for the island and Torquay Cambria for the rest of the counters.  At first I wanted only the white but my husband wanted black so we compromised and did both and I am glad that we did.

That’s the Nero quartzite.  We got to place the template where we wanted it on the slab.

Once the counters were installed the next step was the hardwood floors.

We had 4×4 tiles in the kitchen that had to be removed and it was a messy process. 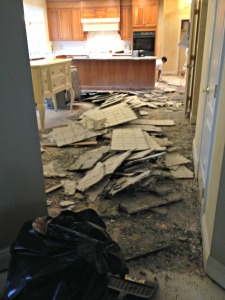 Once the tile was pulled up the cement board was broken up which caused so much dust.  Notice in the first photo, I had the shop vac out and I would clean as much as I could when the workers left for the night but, by the third night, I knew it was a battle I wasn’t going to win. I have to say the guys were really good at picking up the mess every night before they left but there would be at least an inch of dust coating everything. OK, my husband said it was not an inch of dust, it just felt that way to me. Before the destruction began, we removed everything hanging on the walls and plastic-wrapped what furniture we could not move downstairs. Since we replaced all the flooring on the main level, they had to remove tile, hardwood, carpeting and marble.  I am so glad we went with the same flooring throughout.  I would now love to do hardwood upstairs but I am not ready to bring that up to my husband just yet! Well, actually, I am ready he is just not ready to hear it. So I am just going to let him enjoy the  finished main level for awhile!

The tear out took three days and the install took two.

For the flooring, we chose  Armstrong 5 inch hickory handscraped in Candy Apple.  I love the wider plank.  I think it is one of my favorite things in the entire renovation.

After the flooring was complete and before all the appliances could go in we had to do some work on the cabinets.  We chose a smaller refrigerator so we had to build that out a bit and we also had to rework the space above the range cooktop because our old cooktop was a downdraft and the new one needed to be vented up and out.  By saying we worked or

we built, I mean I told my husband what I wanted and he had to build it! He did an amazing job!

Once we removed it we found water pipes behind it.  That’s when we decided to see if we could install a pot filler.  I mean, why not? The wall was opened up so we called a plumber and he did the prep work so we could install it once the tile work was complete. That’s kind of how things went during the renovation… add a pot filler, then hey, why not add new legs to the island?  Some of the changes were small but made a huge impact.

In the above picture you can see the vent (we chose the Vent-A-Hood) and what it looked like in the old space.  It was a bit bigger than our original space.  We had to build a surround to fit it. 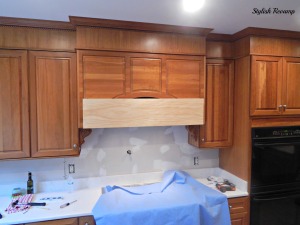 You can see during this time the tile was installed.  We chose white subway tile and in the center we chose a herringbone pattern. 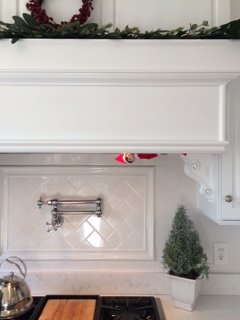 I love the white cabinets with the white subway tile. 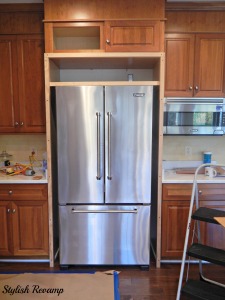 Since we went with a smaller refrigerator, we had to buld it out.  I wanted a shelf above the the fridge.  My husband boxed it out and added columns on the sides to fill in the space.  My son wrote and note and put it in the space so years from now someone else can find it.

Below is the end result.

Looks a bit empty once I took my Christmas decorations down from the shelf.  I am trying to decide what I want to put there next.

I love this runner I found it at Plushrugs.com. It matches the carpet under the kitchen table that I found at Homegoods.

I still need to add finishing touches. In the meantime, here are some of the other finishing touches I have added by revamping and reusing what I already had and mixing in some new elements. 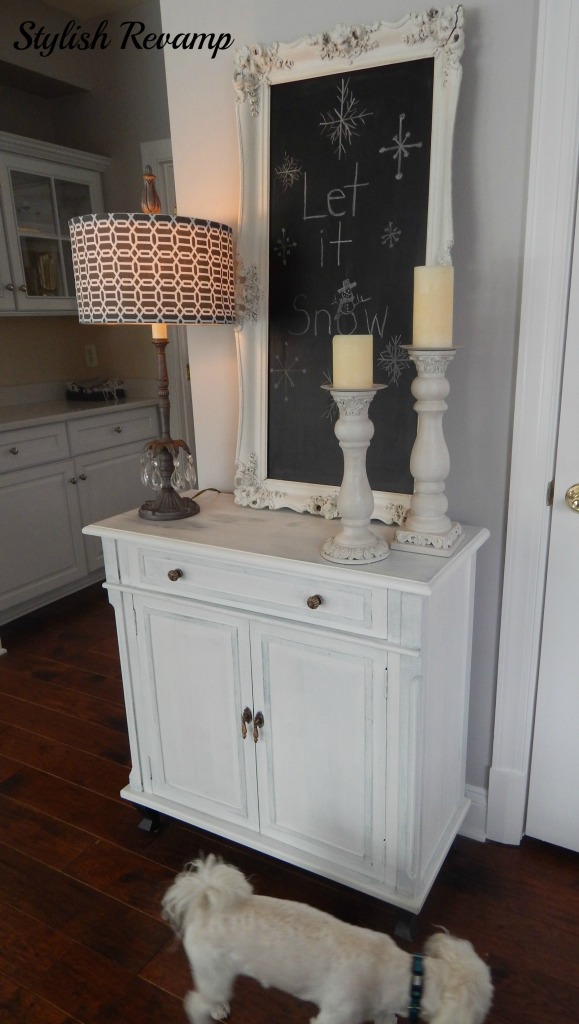 (repainted cabinet, repainted candlesticks, turned an old frame into a chalkboard and my lampshade recovered with material to match my bench and Charlie of course)

A bell to call the crew to dinner.  A Christmas gift from my husband.

We are linking up to:

This site uses Akismet to reduce spam. Learn how your comment data is processed.

Follow along with me as I revamp our home using thrifted finds!